Alpine chalets appear in France, Italy and Switzerland, but the style of traditional French Alpine architecture is in a league of its own. The timeless, classic design focused on practicality. Residents used them as living quarters, but also stored livestock, firewood and diary products in them.

It was not until the 1930s, when the concept of skiing holidays took over, that their design changed to accommodate overnight guests whose primary purpose was skiing. As the decades went by, ski chalets become more glamorous, featuring cosy décor, design and essential utilities like hot water and electric. These days, some sell on the market for six-digit figures, while others are more accessible to budget and middle-class buyers.

“But if there was something roguish and fantastic about the immediate vicinity through which you made your way, the towering statues of snow-clad Alps, gazing down from a distance, awakened in you feelings of the sublime and holy.” By Thomas Mann, The Magic Mountain. 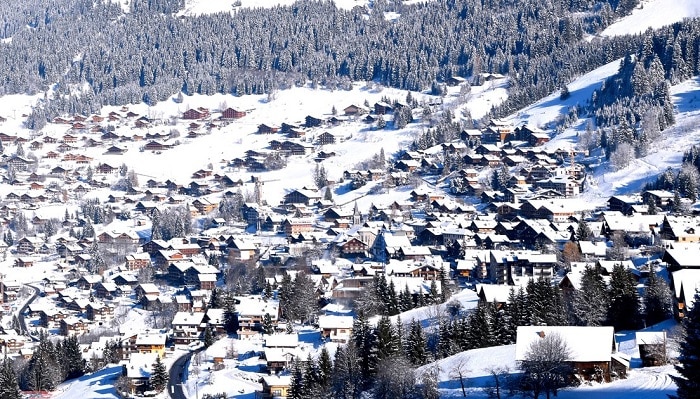 These days, the French Alpine real estate market is luring in buyers from all over the world. Many are purchasing them as holiday homes or for buy-to-let incomes, but as with any mass investment in an area, it needs careful management as not to lose the nostalgic vibes of local heritage.

Local Alp councils have responded to a growing interest with comprehensive modernisation and expansion plans. Eager, to avoid the trappings of popularity that have blighted many other touristic and real estate towns around the world, strict regulations control type of construction materials, and the size of buildings, doors, windows and roof styles. Keeping the classic alpine ambience is a top priority.

Before the skiing industry took over the Alps, architectural styles focused on use and practicality. Owners wanted to make the most of natural daylight and warm weather seasons, so where possible, built houses with the living areas facing south.

They also preferred building into the mountain as a better source of heating and protection against winter winds.  To keep costs down, or sometimes to be close to siblings and parents, two or more families could own a chalet, with separate living areas.

Owners often carved their initials and construction date into exterior walls and sometimes built smaller buildings next to the main chalet where they could store possessions in case fire devastate the main living quarters.

If the owner was a livestock owner, they used the chalet from spring onwards. Bringing their cattle up the mountain plateau to take advantage of fertile grazing grounds after the snowmelt, they could own one or more chalets at different altitudes. During this grazing time, they would also make dairy products and store them in the chalets.

Farmers built stables on the bottom floor, and the animals would provide additional heating for the upper floors. Small vents carved into the walls prevented bad smells from rising. This building style isn’t typically alpine because similar concepts have appeared in houses across the world.

Forested regions provided wood which was cut into heavy-duty planks. They arranged them in a rectangle, or square shape which included sections for storing dairy products, of which the French Alps was and still is famous for producing. Small windows also kept the heat in and cold out.

Architectural styles varied from region to region. If the wood was in abundance, this was the preferred material, but the stone was also a suitable alternative., the materials affected the exterior and interior appearance. Living quarters included a stone chimney, but two other core features were much more critical. 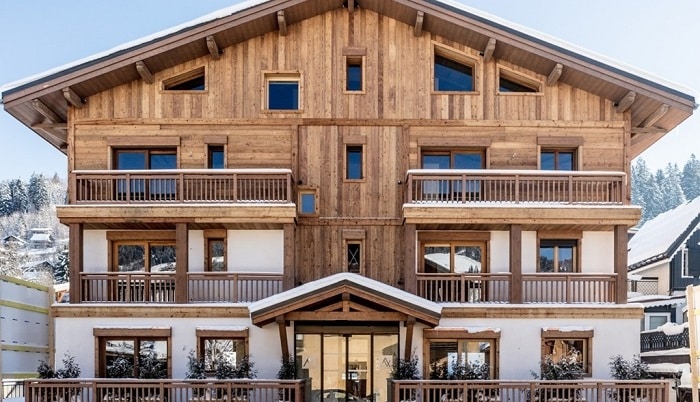 Balconies are an integral part of traditional alpine homes because they served many purposes. During winter, wood was the primary source of fuel for the chimney. The house owner would collect wood and store it on the balcony to dry out but also stacked it to act as extra insulation against wind, rain and snow.

Farmers dried hay on balconies and just opened a trap door hatch to drop it into the stables below. Meanwhile, chilly winter weather acted as perfect refrigeration, so the terraces doubled up as pantries.

Similarities in most balconies is the carefully crafted balustrades, that often included geometric or heart-shaped patterns and as well as being pretty, sent an unwritten message to passers-by.

Gable roofs were another core feature of the architectural design. Looking at the chalet from the front facade, the symmetrical roofs sloped at a 25-degree angle. Hanging over the edges so occupants could walk around or even work during winter, roofs in the Abondance Valley used slate from the district of Essert, but other regions used wood or both.

Owners gave much care and attention to roofs because snowfall could increase a weight load by up to three times, placing a massive strain on the wood. In later years, builders added tall interior pillars for extra strength.

Combining traditional French Alpine architecture with today’s modern style of living presents a unique real estate market found no-where else in the world. Preserving the cultural heritage but also keeping up with the times, means owners have the best of both worlds.  See our portfolio of Alpine chalets for sale here. 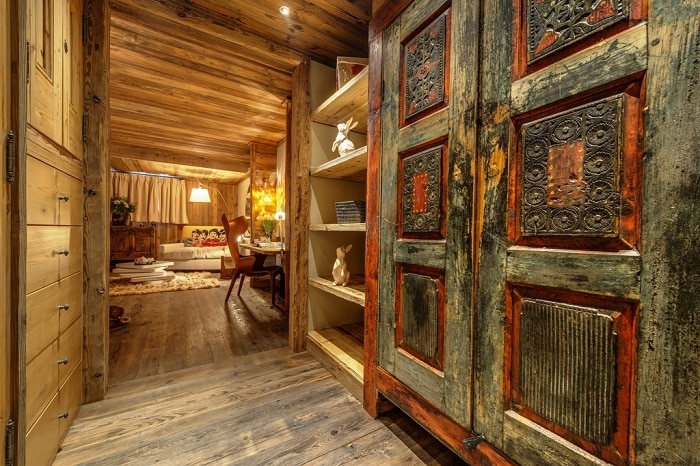