To learn about Tignes ski resort is to take an excellent adventure into a famous French Alp destination. Together with neighbouring Val d’Isère, it belongs to Espace Killy ski district and is a winter playground with 190 miles of marked runs for beginner, intermediate and experienced skiers.

Over 300 shops, bars, restaurants, ski schools and much more sell everything and anything. Getting there is easy. Its southeastern location is close to Chambery, Geneva and Lyon. Its high altitude at 2100 metres ensures a good snowfall, of course, a top priority for skiers. Indeed, it doesn’t have to try hard to lure in tourists from all over the world and is a success story for France’s tourist industry.

If you plan on a ski holiday in Tignes, take delight in knowing you have 5 villages to choose from and a collective range of hotels and self-catering accommodation equalling over 20,000 beds.

The villages called Les Brévières, Les Boisses, Le Lavachet, Le Lac, and Val Claret each have distinctive styles and characteristics, so it is worth researching which one would suit your style of travel. 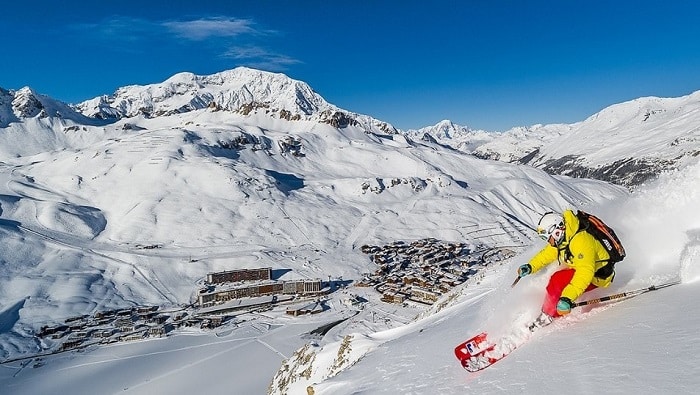 For much of its historical timeline, life in Tignes was quiet, peaceful and uneventful. That was until the 1920s when the French government proposed a new dam that would flood the village. The local population objected for many decades, but it went ahead in 1952, and their town moved to its present-day location.

The most heart-breaking aspect is the government never used the dam despite original projections it would supply 10% of France’s electricity. These days, they clean it every ten years so locals can see remnants of the original village.

Two landmarks were born out of this drastic change for the village. The lady of Lac Chervil statue also nicknamed lady of the lake represents the dam’s impact on local life and resembles someone keeping watch over the old sunken village. While the 17th century Saint Jacques de Tarentaise Church lying at the bottom of the lake, has been replicated and still hosts services every Sunday.

Off-Slope Things to do in Tignes

Tignes is a year-round destination, and this is because when summer comes around, many parks, centres and activities kick into action and open their doors to the public. In Tignes, you’ll never be bored no matter what your age is. 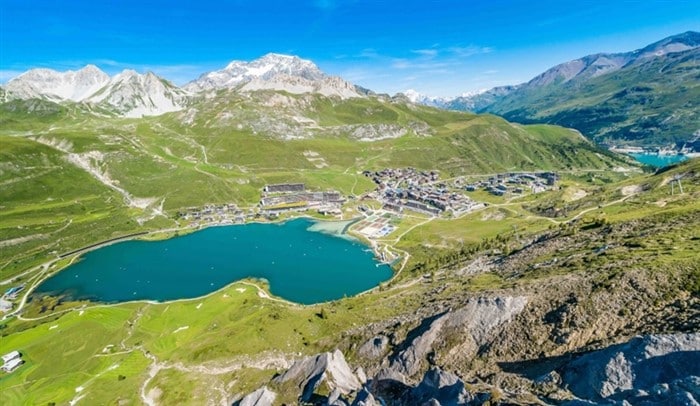 Tignes’s location as part of Espace Killy ski area means its real estate market is in high demand. However, the local council is keen to prevent mistakes from the 1990s, when high rise concrete apartments blighted the landscape. Earnest efforts ensure Tignes keeps its true French alpine resort with a uniformed, pretty appearance throughout.

Some constructors also take part in the government leaseback scheme, allowing owners to claim 20% VAT back and enjoy rental yields of up to 5%. These property buying options fit perfectly, with Tignes’s high profile on the French Alp touristic scene.

See a variety of property for sale in Tinges, or if you plan to invest in French alp real estate, and want to know more about Tignes ski resort, contact us today.