The Best Place to Buy Property in the Alps

Deciding on the best place to buy property in the alps is not an easy choice because hundreds of ski resorts, all offer something special. In recent years, the competition to attract more visitors is driving French Alpine resorts to offer far more than just good skiing, so buyers choosing a home should look beyond the slopes and consider a resort’s full offering.

Whether it is restaurants, shopping, festivals, nightlife, skiing facilities or the après-ski social scene, buyers can find a place to match their lifestyle preferences, and the following are suggestions of worthy contenders.

Which is the Best Place to Buy Property in the Alps?

Chatel, near the Swiss border and just an hour from Sion airport and 90 minutes from Geneva airport, offers short transfers and is a year-round destination. To ski, Chatel has fantastic links to the higher, but less pretty Avoriaz and to uncrowded slopes on the Swiss side.

This pretty, friendly Savoyard village, offers a good selection of restaurants but limited après-ski. Chatel, links to the resort of Avoriaz via the Linga gondola at one end of the resort, while at the other end, the Super Chatel gondola links it with the Swiss resort of Torgon. 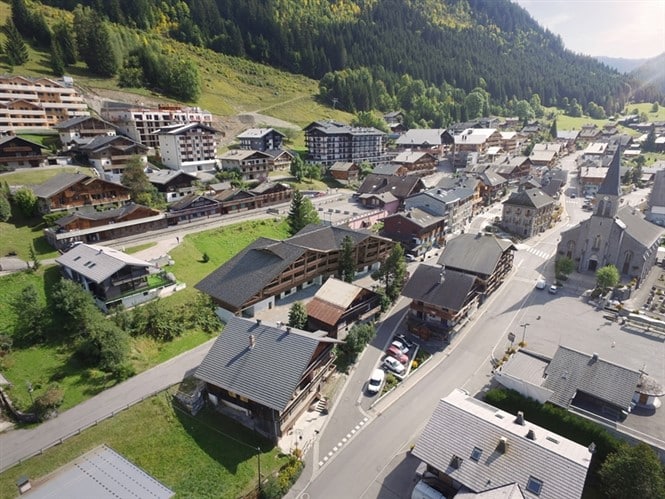 Chatel might not be as well-known with British people as other Savoie resorts, like Tignes or Meribel, but that has helped preserve a traditional feel about the place. Chatel also has that fun quality of offering skiing between two countries, France and Switzerland, so-called cross-border skiing.

Nestled underneath the gaze of Western Europe’s highest peak, Mt Blanc, Megeve has always attracted a discerning visitor with upmarket boutiques and gourmet restaurants make it an exclusive alpine destination. But it also has a cosy charm, with its traditional buildings and pedestrianised shopping street. 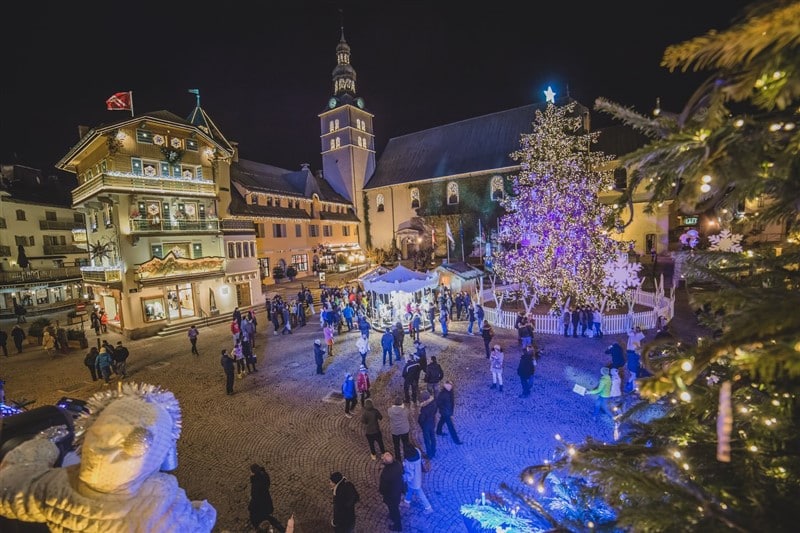 France’s most trendy and progressive mountain restaurant and club, La Folie Douce, put the resort right on the map for people who want to have a good time. On Mont-Joux peak, straddling the St Gervais link – party until 5 pm and then ski back to town afterwards. Sober.

3: Les Gets : Ideal for Families

Well placed Les Gets connects to Portes du Soleil area and also a short drive to Samoens, making the day trip to the Grand Massif area very easy. The village is a little more upmarket than other resorts with a more exclusive feel about it.

The views of Mt Blanc from the top of Pointe de Nyon are the best. The Telegraph also voted it the ‘World’s Best Family Ski Holiday Resort. One advantage of owning property in Les Gets apart from direct access to the world’s largest ski area, is the proximity to a range of other world-class resorts.

Driving distances within one hour include, Chamonix, Megeve and Flaine whilst the Swiss resort of Verbier is a two-hour drive. There is also talk of a future link between the Chavannes and Mont Chery areas, which will further improve the status of the resort.

4: New and Old in Samoens

Samoens ski resort is unknown to the British skiing public, but it has a long list of attributes making it a good place to invest. The village has the unique honour of being the only place in France to hold ‘Monument Historique’ status because of its well-preserved medieval centre includes an old stone church and cobbled streets.

But there’s nothing old fashioned about the area, linking in with La Grande Massif, France’s fourth-largest ski domain that includes purpose-built Flaine. They get lots of snow here too, because of its location on the mountain’s north-western edge. That location also puts in within an hour’s drive of Geneva Airport, so weekends never have to be the same again.

St Foy village is like a pocket-sized version of its more famous neighbour, Val d’Isère – at least for skiing, if not nightlife. Slopes are ideal for all levels, including beginners and children, but whilst many small resorts attributes end there, St Foy just keeps on giving with a legendary dose of off-piste terrain that would keep even expert skiers or snowboarders happy for a lifetime.

One big attraction of owning property in St Foy is the sheer amount of world-class resorts within a short drive – Val d’Isère, Tignes, Les Arcs and La Rosiere are all within about half an hour with Meribel and Courchevel just an hour by car. In summer, you can hop across the Italian border via the Col du Petit St Bernard and have lunch in Aosta.

Courchevel has more Michelin-starred restaurants than any other place so you could fine dine somewhere different every day. Eating hot spots there include Courchevel 1850s two-star Le 1947, a creation of Parisian chef Yannick Alléno with an open kitchen serving up refined Savoie mountain fare. The other Michelin-star choices include La Table du Kilimandjaro, Le Chabichou, Le Kintessence, Les Airelles, Le Strato and Azimut.

A red run in Courchevel is among the world’s top 10 ski runs, as chosen by the UK newspaper the Daily Telegraph, making the place an even more appealing place to own a ski property. The three-kilometre run, called Combe de La Saulire, runs down to Saulire cable car in Courchevel, beneath the 2,738-metre summit of La Saulire which separates the ski areas of Méribel and Courchevel in the Trois Vallées. 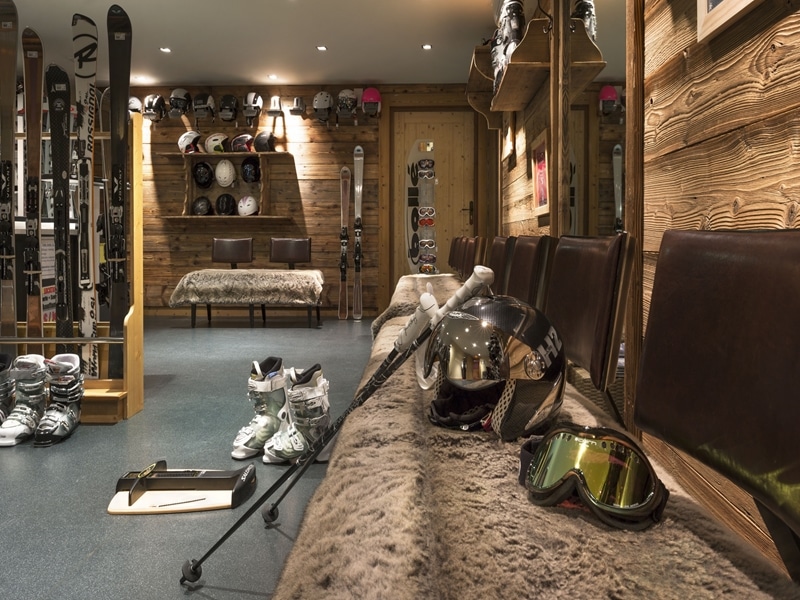 Courchevel’s skiing area, connected to the world’s largest area the Trois Vallées, is one of the best in the Savoie part. It offers 150 kilometres of alpine ski runs served by 58 lifts. Beginners can enjoy fun ‘ZEN’ areas, created for skiing in complete safety, progressing to 19 green and 35 blue runs. For more experienced skiers, there are 34 red and eight black runs.

Improvements to Courchevel’s lift system worth millions of euros included an upgrade of the most used lift in Courchevel Valley, the Biollay accessed from Courchevel 1850, which this season has seen its capacity increase from 2,500 skiers an hour to 3,300.

Winter might be over but for visitors and homeowners in Tignes and Les Deux Alpes, there is still skiing to be had – on the glaciers above these two popular French resorts that open over the summer!

Many places have a weekly market, but Meribel goes a step further and has one twice a week! For homeowners there, it is a fun way to shop for your groceries, with stalls selling local produce, including cheeses, cured meats, and confectionery.

Chamonix is the French Alps year-round nerve centre. It is a popular base for trips to Mont-Blanc and surrounding areas, and its shops cater as much for tourists as for its 10,000 permanent residents.

Chamonix has long been a favourite with Swiss tourists and property buyers. The French resort, just an hour from the Swiss border is attractive to Genevans, who have flocked for generations, despite having dozens of top resorts back home. 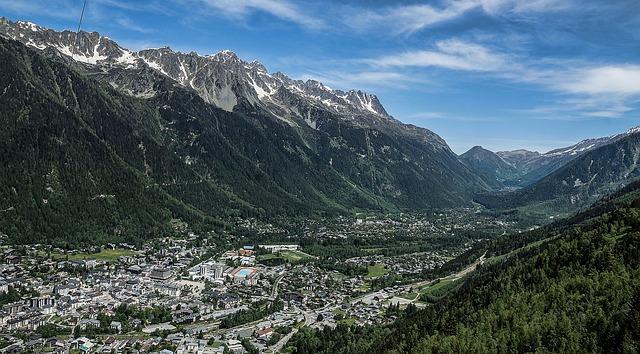 This is a huge area with 490 individual pistes, while Chamonix has 152 km of ski runs. Pistes are above 2,500 m, so there is a good chance of being assured of snow. Just in case Chamonix has access to 96 snow cannons and can supplement natural snow on 23 km of runs.

The resort is well-known for being world-class and attracts the best skiers and snowboarders every season. Some skiing areas such as Grand Montets and L’Aguille du Midi are legendary and have helped to build Chamonix’s reputation as a serious skier’s resort.

But you don’t have to be an expert to enjoy a holiday in Chamonix, as there are pistes available for all standards. It’s a great destination for serious snowboarders, and the resort has produced many world champions and is famous for pushing boundaries of this popular sport.

Après-ski is vivacious, and a huge range of nightclubs and bars stay open till dawn. There’s also plenty to off slopes, including the only genuine tenpin bowling alley, and a very popular casino.

It is a great pick for a short break, as there are no less than six airports within two hours’ drive. Geneva and Sion airport are just an hour’s drive away, so don’t waste valuable skiing time travelling.

Views of Mont Blanc, Europe’s highest mountain, and the stunning Chamonix Valley don’t get more exhilarating than those possible from a glass cage suspended over the face of the Aiguille du Midi mountain.

Skiers and owners of property in the Savoie region who fancy a fun afternoon away from slopes could do worse than venturing up the famous Aiguille peak and stepping into the glass box, known as the Pas Dans le Vide. At an altitude of 3,842 metres and with nothing but 3.6cm of glass around you, the sensation of entering the box is like floating, while views of Mont Blanc are exceptional.

Reaching Pas Dans le Vide is via the 20-minute cable car ride up the Aiguille du Midi, the summit of which is the closest you can get to Mont-Blanc without a pair of crampons. Aiguille is also the starting point for the ascent of Mont-Blanc via the Three-Mont-Blanc Route, and off-piste skiing, and trekking and para-gliding outside of winter.

As you can see, the best place to buy property in the Alps is your lifestyle preferences, but the budget is another determining factor. Browse our portfolio to see how much ski apartments and chalets cost in many French Alp Ski resorts. Just call us or fill in the enquiry form to find out more details about any property.