Keeping its title for the seventh year in a row, Val Thorens once again grabbed the honour of being named, the world’s best ski resort. Given by the World Ski Award organisation, it proves the resort’s dedication to the industry and a high reputation within the French tourism sector.

The award, part of a larger initiative covering resorts in America, Asia, and Europe, aims to promote excellence in ski tourism. Based on the public’s opinions and experiences well as industry members from travel agents to media, votes were accepted online over 16 weeks.

With the official ceremony taking place on the 23rd of November, other awards included best hotels, chalets, travel agents and top resorts for individual countries. Over 2 million nominations came in from over 140 countries, therefore providing fierce competition for competing sectors. The committee gave out prizes during a 3-day event that also included gala dinners, press trips, skiing time and the official ceremony.

About the World Ski Awards

As the sister organisation of the 26-year-old World Travel Awards, the World Ski Awards was born 13 years ago to recognise and reward excellence in the industry. It is the only global organization of its kind, with a committee who wants to drive standards within the industry so it maintains a selective reputation. Find out more on their website worldskiawards.com

Val Thorens, which this year opened its official season on the 23rd of November, attracts the attention of skiers thanks to guaranteed snowfall. At an altitude of 2,300 meters, skiers on holiday are always impressed by Europe’s highest resort.

Another aspect luring in skiers from near and far is their commitment to constantly upgrade infrastructure and introduce new activities like this year’s additions of ziplines and a glider aircraft. Other activities include helicopter rides, sled dogs, and ice diving. Val Thorens belongs to Les Trois Vallees area, that is the world’s largest ski area, and includes other notable resorts like Meribel, and upmarket Courchevel. 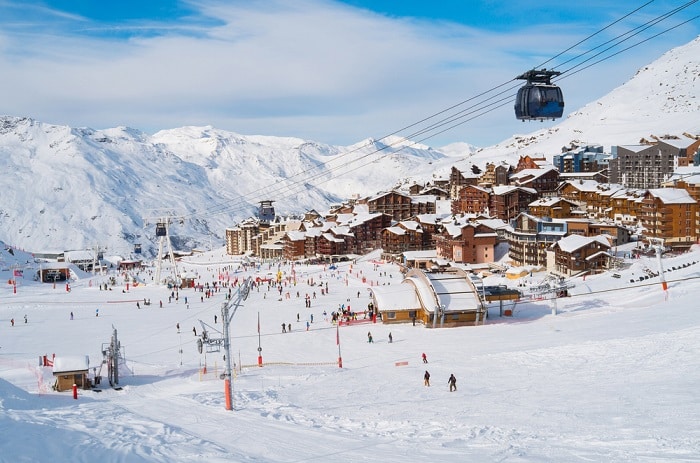 In a separate initiative, Good Trip Clothing, a skiwear brand also analysed the popular social media site Instagram to find out which was the most popular. Drawing in data from 20 million posts, they ranked Chamonix Mont-Blanc as Instagram’s most famous resort, with over 1 million Instagram posts displaying the town and slopes. Val Thorens came in at 5th place.

Read More Ski News: Read more news from across the French alps in our blog and article sections. Also including how-to guides, on buying French property, it is full of useful tips and advice for anyone looking to invest in this real estate sector. Additionally, find out which ski resorts were voted the best in the world by Telegraph readers.